Poker Tells And How To Read Them 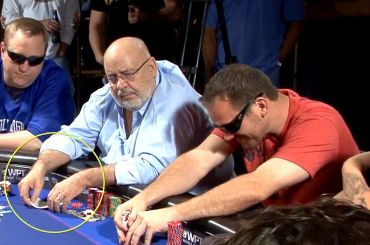 Poker Tells are a fascinating subject.  Most beginner players put far too much importance on trying to read another player, but at the same time, some successfull poker pros focus entirely on the strategy aspect of their game, and miss out on some information in a live game.

Pro tip:  If he eats the Oreo, fold your hand.  (kidding)

Today, we'll dive into some of the more common tells you can observe at a live game.  We'll be looking at tells which are common, reliable, and both.

This is one where you're going to say to yourself, "Crap, I do this sometimes".  Don't worry.  You're not alone.

A "defensive movement" is when your opponent reaches for chips, as if they're going to definetly call or raise, as you're getting ready to make a bet.  It's a very common sign of someone not having a strong hand.  Mike Caro discusses this tell in the book "Caro's Book of Poker Tells".

This is a reliable tell, and one you can generally use to adjust your action in a hand.

The reason this tell is reliable, is that holding a strong hand, a player is less likely to give them player acting before them a reason not to bed.  Conversely, they're going to be more likely to not move or reach for chips.

It also tends to happen more often, the weaker the players hand is.

The reason this is a reliable tell, is that it starts in the subconscious and instincts.  It's not that the person is actively trying to relay this information, it's their mind reacting in a defensive manner and it manifesting physically.

Making small chip movements before checking to a bettor/raiser is another example of a defensive movement.

Let's say that on the turn, Player A checks and calls a bet from Player B fairly quickly.  On the river, Player A picks up a few chips, riffles the a second or two, and then checks.  This is a subtle display, but can be a sign that Player A is unconsciously trying to give Player B that they're interested in this pot, which increases the chances they have a weak hand.  The think to remember about defensive behaviors BEFORE your opponent checks, and not when they are facing a bet.

Another example of a defensive movement, are small and subtle hand movements towards a players chips.

Let's say that it's on the river, and Player A has checked.  As Player B is deciding that to do, Player A makes a small hand motion towards his chip stack.  This can be a subtle display of being uncomfortable and as a result, is a subconscious attempt to discourage a bet from Player 2.

Other indicators can be players who stare intensely at you after they have checked, or players who appear to be sitting uncomfortably after a check.

Now, none of these are 100% foolproof.  If you're using defensive movements to make your decisions at the table, it's safter to be looking for combinations of any of the above instead of focusing on noticing just one.  Additionally, you'll want to pay attention to the players physical movements at different points in different hands.  Some people just naturally move around in different ways, so you'll want to be able to tell the difference between the two.

To make it simple, when a player makes a large bet, any observed hesitations or pauses make stronger hands that much more possible.  When a player is bluffing, they have a tendancy to do it in a straightforward way with pausing very often.

Here are a few examples of "hesitating" type behavior:

-A player makes a lot of stopping and starting motions when counting out a bet, or making a bet.
-A player verbally says "Bet" or "Raise" and then pauses for a moment before either putting their chips in the pot or announcing the amount.

The reasons these tend to happen, is that players betting weak hands and making bluffs generally don't want to be studied for very long.  The longer it takes someone to complete their action, the more time their opponent has to pick up on something, and to analyze the hand.

Additionally, players who are bluffing or have less strong hands tend to act quickly so it will display confidence.  Conversely, players with strong hands have added incentive to display behavior that suggests they're uncertain about their hands.

Keep in mind, that it's usually easier to find signs of comfortability and relaxation in people than it is to find weakness.  People with strong hands tend to do more unusual things than some who is bluffing or betting a weak hand.

This can be a little trickier, as people will check and re-check their hole cards for various reasons.

A general rule-of-thumb is that players who are waiting to act and check or re-check their cards are indicating weaker cards.

Take the example of a player who calls a preflop raise, gets to see the flop, then looks at their cards a few times before checking.

If they hit the flop hard, thinks sets or trips, they're more likely to not want to draw attention.  Much in the same way that disinterested checking or calling can be read safely to not be entirely focused on the hand, and as a result likely have a weaker hand.

Another example.  Player A makes a large river bet, and then goes back and checks their hand.

This is generally a sign of strength.  Because checking cards can often be seen as a sign of weakness, instinctively, this player is less likely to be bluffing.

This last example is a good one to illustrate how the same behavior, but difference circumstances surrounding the behavior, should be interpreted differently.  If you get to focused on the behavior itself, and not what's happening around it, you could make a costly mistake.

These are the tells that, in this authors opinion, are the most reliable.  Summarized quickly, they usually mean a weak to medium strength hand.

But why?  Well, if a player takes immediate action that means that in their mind, they have already ruled out the possibility of putting in a raise.  When a player is holding a very strong hand, they're usually going to be thinking about how to get maximum value.  Players who have a very strong hand and make the decision to just call usually do so after some consideration.

Now, this doesn't really matter if the person snap calls your river bet.  But it's a behavior you'll want to look our for preflop and on the flop.  At this point in a hand, the bets are generally smaller and people tend to make decisions more quickly.  As we get to the turn an river, the bets tend to get larger, and most people will give their hands some extra thought.

When we look at preflop action, players who quickly call 3 and 4 bets, are going to have [Jx][Jx]and [Qx][Qx]type hands more often than you'd think.  These are hands that people subconsciously know are too strong to fold, but also don't want to commit to another raise.

We can also factor how agressive a player is in making out reads.

Let's say we're playing an agressive opponent, and they call a bet quickly on a flop of [9c][Qd][3d].  It's going to be far less likely that the agressive player has a flush draw, because an agressive player will usually at least consider the possibility of a raise, even if his eventual action ends up being a call.

One last thing to consider, is the amount of time that has passed in a hand.  A quicker call immediately when the action gets to the player and they haven't had to wait for other players to make a decision, with generally result in a weaker hand.  But, if a player has had lots of time to think about his action while waiting for others to complete their action, you should give less credit to the quick call being a sign of weakness.  That doesn't mean it indicates strength, just that it's less likely to indicate weakeness.