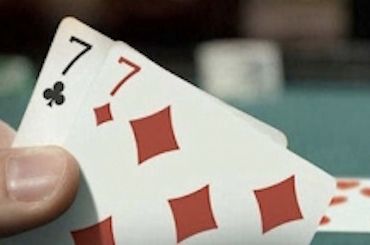 Ahhhh...that feeling when the flop comes out, and you hit your set with a small pocket pair.  It's one of the best feelings in poker, right?

Since a low set is usually a well disguised hand, it makes them very profitable.  But, while profitable, lots of people still make mistkes when playing them.

The most common mistake, is just calling with too many small pairs against early and middle position preflop raises.

Today, we'll look at that and how you should decide which small pairs to play relative to your stack size.  We'll even touch on how to play them post flop - which is important because you'll only hit your set one in seven times.

When you've got a deep stack in a tournament, the value of small pairs goes up, so we're going to be opening and flatting them more often from a variety of positions.  We're not going to talk much about re-raising with small pockets, since it's really not a great idea most of the time to be three betting hands that don't play well post flop.

There are lots of players who always flat with small pairs and a deep stack.  As much fun as flopping a set is, it's not always the most profitable way to play.  As alwasy in poker, position is imortant.

Let's use an example of an under the gun raise, and we're next to act.  We have to give some respect to the UTG raise, and know that there are many other players still to act behind us, so our calling range here should be AA -> 88.  77 and lower is just a fold.

Clearly, our range widens as the positions change.  The closer we get to the button, the more of our pairs we can flat or open.

Let's say we're in middle position, but also facing a UTG open.  We can now add 77 and 66 to our flatting range.  When we're in late position, like the hijack, we can safely add 55 to our flatting range.  But the time we're in the cutoff or on the button, we'll add the rest and flat any pair.  The reason we can add more pairs, the later our position, is because it's not far less likely that we're going to be facing a squeeze play as the number of people to act behind us decreases.

Note, that all of the above examples are when facing a UTG or UTG+1 position raise.

I'm not going to talk that much about playing your pair after you flop a set.  I've written other articles on getting maximum value when flopping a set, and playing for value is those situations is reasonably straightforward.

The place where people tend to make mistakes, is when you don't hit your set.  The danger in this scenario, is that it will happen the most often, so it's important to play it properly.

We get dealt [4d][4h]on the button
Villain raises in middle position.  We call and are heads up

Villain continues, and now what?  What if he checks?

Villain will be continuing most of his range on a flop like this.  This is a good spot to continue when you flop your set (duh) or your pair beats the middle card on the board.  If your pair can't even beat middle pair on the flop, it's a very easy play to let it go and move on to the next hand.  We have two outs, and no backdoor draws if we are behind, and we're folding to any turn or river bet if we haven't hit.  Easy fold.

But, what if Villain checks?

You're probably thinking bet, right?  That's a mistake.  This is a perfect flop to check behind.  Any bet we make here is really just turning our hand into a bluff, but our bluffing range in this spot will usually be hands that have backdoor equity like [Jh][Qh]or [As][5s].

Betting your small pockets that missed on boards like this will make your bluff-value ratio way too high, as opposed to our backdoor draws that can dramatically improve on the turn and let us barrel again on later streets.  Plus, we do have some showdown value without having to invest any more into the pot.

Playing small pairs on a short stack, is an entirely different beast.  We have less upside to flopping a set, and fewer chips which we can affort to lose since we'll miss the flop most of the time.

So even though we're tightening our range for calling and opening, with a smaller stack we have more options for shoving, squeezing, and outright stealing.

Ask yourself this question.  With with 20 or fewer blinds, how many pairs should you shove from the button, and still be profitable?

But....there's always a but...while shoving every pair from the button or cutoff may be profitable, it still may not be correct.  You should always be considering who is in the blinds, the strenght of the players, and more.

If we start with the assumption that Villain is opening a fairly straightward range from the cutoff, we're probably going to have about 47% equity.  Despsite the fact that his range is a little ahead of our hand, our shove here will give us tons of fold equity.  Villain will most likely fold a large percentage of his range against a shove.  We're still ahead of his AQ, AJ, A10 hands, and still have our trusty 13% to hit a set on the flop.

Playing our small pockets properly in tournaments is HUGELY important.  The points to remember from this are:

1: When you've got a deep stack, flat and open much wider
2: Avoid the smaller pairs against early and some middle position opens
3: Don't be flatting with a short stack
4: Use your shove to get fold equity with a short stack in late position